the medium of carousel 154 is not only light but as well a spinning wheel such as for rollin' ( what goes up must come down ).
this kind of throbber is well-know for any electronic device's user even if  its presence is sometimes close to subliminal. it's displayed when a program is performing a background task until completion. its presence combines action, expectation and waiting time.
in the white cube, its kinetic and phenomenological interactions more wildly occured than indoor.
the reiterations on the piece and in all the space could lead to different cognitive responses and sensations for the viewer depending on his state of mind and its present 'physicality' ( for instance, slight lack of equilibrium ).
the use of this generative animation was a way to revisit kinetic art in the present digital time and to develop experimentations that started for me in the black cube of the stage where define light and space can create as well new aspects of so-call reality.
the present and the resulting, the objective and the subjective, the perceived in its both meaning were at play.
it was as well a response to the kind invitation of the gallery for this exhibition 'in tandem' with julio le parc. i usually favor leds, because of their energetic efficiency. julio le parc started is work in 60's when no such devices were available and it was an opportunity to use again ( like on stage before ) incandescent light bulbs that have an analogic behavior and produce a less aggressive light.
my choice was made on infrared to expand physical interactions with sound and heat produces by the bulbs ( see video ) and as well for their vivid organic red emitting in the visible and the invisible spectrum.
the spinning wheel was placed as such the spiral staircase in the middle of the room would become part of the installation, the bulbs projecting its 'cinematic' shadow and the ones of people in the room on the opposite wall. the all installation was thus to be create as introspective disassembled carousel.
154 is the reverse of 451 and 154 fahrenheit gives 68 celcius … i was born in red may 68, so the title of the piece was creating an other mise-en-abime.
the heating was turned of to balance the electrical consumption of the bulbs that were thus heating the room during the winter season of the exhibition. 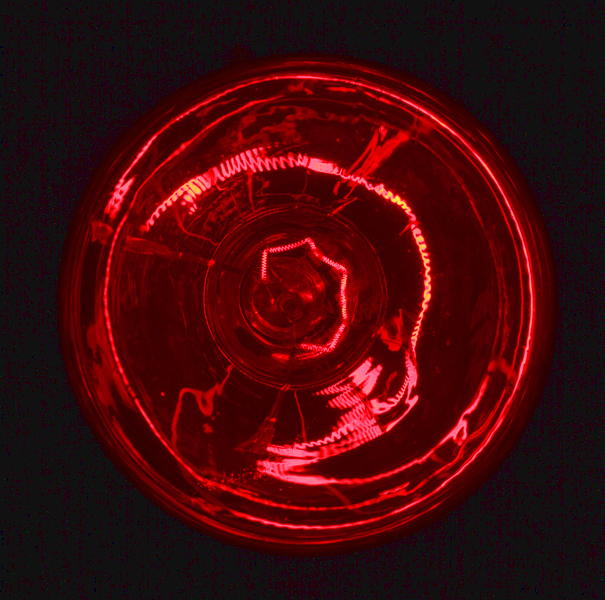